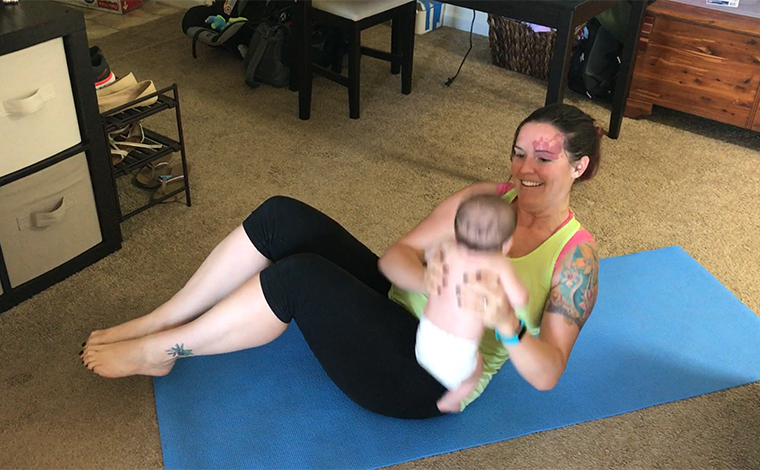 Fitness is a family affair in my house. My husband is extremely athletic—one of the many attributes that attracted me to him in the first place—and I’ve been active for the better part of a decade, so we mesh well. While he was on the track and swim teams in high school, I played AYSO soccer for five years and swam because I loved it. We were also both part of our respective high school marching bands (and don’t think for a second that that’s not a workout!).

Despite those early experiences, I didn’t develop a deep appreciation for fitness as a lifestyle until I was about 22. I had diverged on a rocky path for a few years, and when I came back around I found myself miserable and very out of shape, as I discussed in an earlier post. I was very surprised to see what an enormous impact changing my habits had, and over the years I would seek out like-minded people to surround myself with. I found that the more connections I had who shared this passion, the better my life would be.

What happens when people start a new workout routine, or are trying to make any big lifestyle change, really, is that they frequently don’t surround themselves with enough support. Any major change is extremely challenging if you’re trying to do it alone. When I first started those Jillian Michaels DVDs, I was doing them alone, then walking alone, then running alone. One of my roommates at the time would come out and sit on the couch so she could cheer me on as I jumped around like a madwoman, and another roommate a couple years later would walk out of her room one day to see me doing supermans (lying on your stomach with arms and legs extended and lifted) and muse, “Ooop, somebody’s flying in the living room!” To this day I can’t do that move without thinking about her and smiling (love you Shellbert!). I had encouragement, but it wasn’t the same as having a true trudging buddy to be sweaty and miserable right alongside me.

The times when I’ve truly excelled are times when I had an awesome support system—people who knew my goals and always wanted to see me achieve them. That’s one of the reasons I’ve always loved group fitness classes, because it’s an added layer of accountability. Even though I didn’t get super chummy with people, I still went to the same classes often enough that when I didn’t show up, people noticed, and often asked me about it when I came around again. But when I’ve had a particular instructor (yes you, Kim!) or walking buddy (Susan!) or training partner (Guin and Mom!), it’s fueled my fire to not just show up, but also to constantly improve. That’s why I feel like I lucked out so much with the hubs, because with everything I’ve experienced as a result of my pregnancy, he’s been my ultimate fitness partner and cheerleader.

It took a while to get back into my routine, first because I was recovering from the c-section, and then because I did too much too soon and got injured. But every step of the way, whether it was a short walk or a 45-minute cardio strength-training workout, hubs has been right there, telling me what a badass I am. He actually wanted to yell “BEAST MODE” during childbirth, but I vetoed that pretty damn fast. Yelling it while I’m doing 30 burpees, however, is acceptable. And now in addition to him, I’m also part of a Facebook group of fit gals who are all following similar workout programs, and I’ve made a point of posting regularly and commenting on other people’s updates. As nice as it is to receive support, I feel it’s uber important to provide it, too!

This past weekend I had the privilege supporting hubs as I watched him complete his first half-marathon, and I cannot tell you how proud I am. Despite my moments of hormonal envy as he trained his butt off while I was barely able to do a push-up, I made sure to tell him regularly how proud I was, and to keep encouraging his efforts. He’s a natural runner (something I very much am not), and he’s been wanting to do this race for a couple years now, so watching him finally reach that goal—and to keep an incredible pace the whole time—was very inspiring.

When I look at this lifestyle we’ve become so accustomed to, I think about our little girl and hope that she will learn from us. My mom was incredibly active when my older brother and I were growing up, and we loved to participate right along with her (including interrupting her laps in the pool by swimming under her, or popping up right in front of her at the end of the lane…we were clearly very helpful children). We also spent a crapload of time outside—riding bikes, climbing trees (and snapping branches and dropping things to make it sound like someone fell out of it…again, helpful children), rollerblading, playing tag, you name it. I want baby girl to have that same experience.

My focus these days frequently falls to what kind of example I’m setting for our daughter. I want to be the parent that leads by example, not just instruction (and believe me, I’m well aware that won’t be a flawless effort…but maybe I’ll hide in the closet when eating brownies for breakfast so she doesn’t see it). I want to raise her in a culture of fitness, so that it doesn’t have to be a struggle for her to develop that mindset later on. I won’t force her to play sports she doesn’t like or stick her in some dance class she can’t stand, but I will always aim to help her see the endless benefits an active lifestyle has. I hope that she can find a passion of her own, and maybe hubs and I can even learn from her and her choices. And in the meantime, I’ll continue to let her find amusement in us doing burpees, because one day she won’t find those quite so funny.

As you all know, I’ve been lamenting my bum leg for a couple weeks now (found out last week that it’s a “medial collateral ligament strain”), and my fairly aggressive workout routine came to a screeching halt because I can’t do all the jumpy-runny-squatty things I was doing. I was biding my time with low-impact home weight workouts, but I was getting bored and restless very quickly, and that’s no bueno. I already have periodic bouts of postpartum hormonal issues where I lapse into feeling very low and sad and overwhelmed, and exercise is my absolute top outlet for all of that. It’s my sanity-keeper, and without it I feel kinda lost.

For several weeks the husband had been in my ear about a larger exercise equipment purchase he wanted to make that I was somewhat skeptical of—a sandbag. As in, a heavy-duty duffel-type bag with multiple handles on the outside that then has other heavy-duty bags you can fill with different weights of sand and stuff inside the first bag. I’d never used one, but he had and swore it’d be well worth it. As I’m prone to do, I judged his request, because I saw it as something that would help him and not me (truth: when I’m in a sour place I can become self-centered and envious very quickly), and due our current financial situation I wasn’t too keen on the $130 price tag either. But, at the end of the day he is the breadwinner in our family, and even though I’m the voice of financial reason, when something like this comes up that I know he really wants and it’s at least somewhat practical, I’m not gonna stop him.

So now we own a sandbag. He got it last week and we have interchangeable liner bags that are filled with 22 lbs (mine) and 45 lbs (his) of “play sand,” which is pretty much just slightly damp sand that won’t slide around and spill easily (and isn’t filled with rocks and twigs and broken glass and trash like the sand at most beaches). Let me tell you…it only took one workout with this thing for me to fall in love. After one workout I felt more like myself, and I immediately no longer cared about the cost. I spent a solid two weeks feeling sorry for myself, and after one super legit, painful strength routine with Mr. Sandbag, I felt amazing. And when I feel better, I get to a more solution-oriented place, which then leads to other ways to feel better. For example, the husband mentioned that one of his coworkers does yoga and pilates, and I went, “Oh! Pilates! Duh!” I used to do it all the time back in the day, but it’d completely fallen off my radar with all the other stuff I started. So I hopped on YouTube, found free workouts, and did them three times last week (my upper body and core don’t know whether to love me or hate me right now). I also kept doing sandbag workouts and knee push-ups, as well as the PT moves my doc gave me for my leg. And guess what? I’m healing! Sitting on my butt for two weeks, I swear the pain was getting worse, but that’s because I wasn’t doing anything to help it. It might sound counterintuitive, but “active recovery” is definitely a thing. I haven’t been going crazy, mind you—95% of the workouts I’ve been doing have intentionally omitted heavy leg work—but I haven’t left it out entirely either. Yesterday my big accomplishment was taking that 22 lb sandbag and walking the half-mile loop around our apartment complex (a fun task, I assure you). And today I’ll swing by our front office and pick up the flexible knee brace I ordered so I can *hopefully* try a barre class later this week.

The moral of this week’s story is to work with what you’ve got. I spent too long being a mopey moo and hating everything, only to realize that I just needed to look for a different solution. Sending all of you “inner beast” vibes so you can find whatever strength you need this week too!